Have you ever seen the movie “How to Lose a Guy in Ten Days“? In my early days of dating, I made many mistakes, some similar to those that Kate Hudson’s character purposely makes when she’s trying to get Matthew McConaughey’s character to dump her.

Then I stumbled upon Sherry Argov’s book, “Why Men Love Bitches“, and I realized that while I wanted to blame the guys who were standing me up, what I really needed to do was change the way I responded to them — I needed to gain back my self-respect. Here is what worked for me.

Realize that emergencies do happen

If your date doesn’t show up when he’s supposed to and he doesn’t contact you to let you know why, realize that occasionally, emergencies do happen. By “emergency”, I mean something along the lines of an automobile accident, being rushed to the hospital with heart attack symptoms or having to take care of a close relative who needs immediate medical attention.

If this happens, he should call you when he’s able. If it happens often, though, you might want to avoid setting up any additional dates. He’s either making excuses, or extremely accident prone – neither is a good characteristic.

What to do: Give him the benefit of the doubt, providing he calls you later to let you know what happened.

Unacceptable excuses are not okay 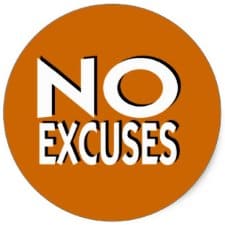 If he stands you up then later tells you “he dropped his cell phone in the toilet” or “found out he had to work at the last minute and couldn’t call”, walk away. Likewise, telling you at the last minute that he has to take his teenage kids camping is not an acceptable excuse.

What to do: If he isn’t treating you with respect and he asks you out again, give him a polite but firm “no”. Don’t cry. Don’t argue. Use concise, polite language to get your point across. As Sherry Argov recommends in Why Men Love Bitches, don’t bend over backward, and don’t be too tolerant of disrespect. If it’s a choice between your dignity and having a relationship, prioritize your dignity above all else.

Your dignity is more important than having a relationship

These days, even those of us who lose our phones can find a way to call someone unless we live in a remote corner of the Yukon Territory. Work schedules can change, but he should call as soon as possible and make it up to you as best he can.

What to do in all cases: Remember that the man you are dating is not the center of your universe — don’t give up the things that matter to you in life. Keep your self-respect and let that govern your decisions. Your guy will respect you more for this and work harder to be punctual and show you that he cares. If he doesn’t, maybe he’s not worth the effort. After all, you don’t want to focus on the wrong guy when the right one could be waiting just around the corner, right?